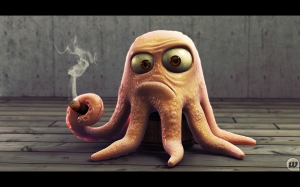 If your curious about this over-priveledged, power hungry octopus – read on …

I read the following article …

It concerns predatory academic publishing … about time this was addressed.

My response in their comment’s follows:

Nowhere has predatory academic publishing been more prevalent than in the field of education itself.

While we are still reeling from one academic’s perceived assumption that “Reading is a psycholinguistic guessing game.” (Goodman) along comes the ultimate threat … “Common Core”. This is further decimating education in the USA.

While it touted the intention to raise the standards of education for the poor and literary challenged students, it turns out to be a plan to shut down the public schools serving them in favour of charter schools who don’t want these children!

This latest push to corporatise education is a publishers dream. Pearson, who owns 90% of the education market is in a position to promote it’s own products & earn mega $$$. The Gates Foundation and ALEC members are in a position to fund their own agenda/s. High Stakes Common Core testing requires technology – computers, tablets etc (constant updating is a given).

Bill Gates is providing a new tablet to rival the iPad. His tablet, named “Surface”, is to have exclusive rights to Common Core materials (supplied by Pearson of course). Gates is denying any suggestion that he may have alterier motives for the millions he is providing.

Parents are in the streets protesting.

Are there no journalists out there interested in the potential push of this octopus-like goal for world domination of all matters educational – that we are under serious threat?

I could go on about the connections of ALEC – Pearson & Gates, who have made a push into the African countries ‘doing good things’.

From Diane Ravich’s bog: “This may not come as a big surprise. The Economist magazine, known for its free-market perspective, supports the growth of private schools for the poor in Africa, the Middle East, and South Asia. Did you know that Pearson, the British mega-corporation, owns a 50% stake in the Economist?”

Come on guys – this is HUGE … we need journalists like you to weigh in on this before the second wave of American stupidity in education washes over us. Pearson & Common Core are already established organisations in Australia. Just join Diana Rivich’s blog for a week .. take 2 minutes to look at the preview of “The Building Machine” on YouTube

These are the matters that count. If you want to dramatically improve literacy in Australia, take infant education off of the existing, entrenched, ideologically driven pseudo academics ‘training’ (mistraining) our infant teachers.

If we can’t stop this problem then we need to be more adroit at sussing them out and avoiding their influence.

Forget the big push for “College Ready” / “Retention rates” etc. We can keep spraying the canopy till the cows come home. If our children can’t read then they can’t wait to leave school.

The REAL problem is root-rot. It lurks in infant grades & the movers & shakers and advisors to our political ministers will do anything in their power to keep the focus off infant grades & infant teacher training.

If journalists would only help by digging down to the roots where the problem is hiding and shine a torch on it we might save ourselves from the predictable onslaught of “Common Core”. Our weakness is their opportunity.

I am a tutor. I see the unneccessary failure fallout daily. Our children are the victims, they are many and I weep for them. Our entire society suffers.

Time and time again I see reference to important issues calling for the need to “educate the people”? How do you educate the uneducated?

4 thoughts on “Society’s dilemma: How can you ‘educate’ the uneducated? (Apart from 3 word slogans?)”